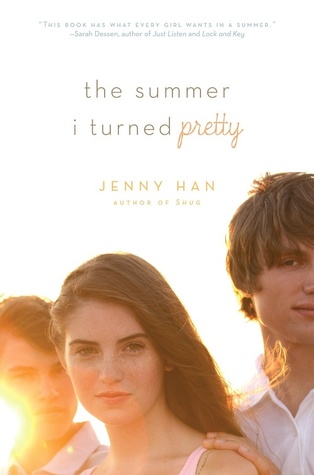 Belly measures her life in summers. Everything good, everything magical happens between the months of June and August. Winters are simply a time to count the weeks until the next summer, a place away from the beach house, away from Susannah, and most importantly, away from Jeremiah and Conrad. They are the boys that Belly has known since her very first summer–they have been her brother figures, her crushes, and everything in between. But one summer, one terrible and wonderful summer, the more everything changes, the more it all ends up just the way it should have been all along.

This book encompasses all that is needed in a perfect spring/summer read. It was a delightfully light read and thoroughly enjoyable.

I like that Belly the main character of the book was such a teenager. Jenny Han captured quite well the struggle of a 15 year old in a world where she is trying to be grown up and deal with all the new emotions going on in her head balanced alongside the need to still act like a little kid at times. I loved that sometimes trying to hold it all together got too much for her and she threw a bit of a tantrum and a sulk but then spent tome after than feeling that she’d let herself down. For me the best thing about Belly was that she wasn’t perfect and was still trying to find her own little niche in the world she was growing up into

I loved the setting of the book. This idyllic and huge beach house with a pool by the sea. It added to the story and the summeryness of it all.

The boys in this book did drive me a little crazy. I don’t quite agree with Belly on the whole Conrad vs Jeremiah debate (I’m probably too much of a softie) and found Cam to be a bit too smarmy for my liking.

I also liked the relationship Belly had with both her mother and her mother’s best friend and the comparison between the the two. As someone who could never quite do the girly chit chat with her own mother (especially when we lived under the same roof) I found the comparison to be quite poignant.

I really enjoyed that the book occasionally had chapters which were scenes from summers Belly had previously spent at the beach house. I love it when books do this as a way to fill you in with the backstory of the characters involved.

All in all a fab little book which, while not mind blowing, captures the spirit of growing up and summery holidays brilliantly well and is an awesomely engrossing page turner

1 thought on “The Summer I turned Pretty Jenny Han”