Hey guys today I am here with another review 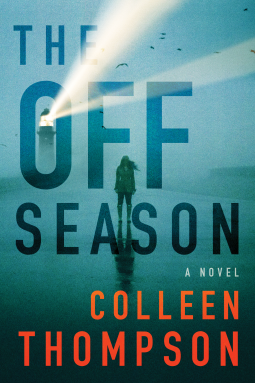 Winter winds off the Atlantic have turned the tourist mecca of Seaside Creek New Jersey, into ghost town. Dr Christina Paxton however is growing accoustomed to living with ghosts. Recently widowed the emergency room physician has returned to the shore with her young daughter house sitting a sprawling beachside Victorian home. One night her two year old calls her by a name that makes Christina’s blood run cold and send her thoughts spiralling back thirty years.

Deeply unnerved and certain someone else is in the house she flees with her child into the cold night only to come face to face with Chief Harris Bowers, a former classmate with whom Christina is wary of being played for a fool again. As threats emerge, Christina and her small family find themselves in grave danger. It seems there is no one she can put her trust in- least of all herself.

The Off Season is a romantic suspense that I really enjoyed. It has everything that is making that type of story enjoyable: a lot of twists and turn that kept us guessing until the very end. It was my first book by Colleen Thompson and I will be on the lookout for her other books. Storywise it is almost perfect. The only thing that bugged me is the ending. It has a lot of different things going on and I can’t shake the feeling that it might have been a little far-fetched. This being said, it does not compromise the quality of the story at all, it is only a little something that I needed to get out of my chest! When a story is set in an old Victorian home in New England, it can’t go wrong. Here is a brief summary of the story: Christina Paxton decided to move back to her hometown after her husband died from a heart attack. As soon as she is settling into her renting property, strange things are happening and Christina is worrying about her daughter (Lily) security. Harris is an ex “lover” of Christina and he is working in the local police force. He never totally got over her (and the way he treated her). He vowed to keep Christina and Lily safe and is ready to do whatever needs to be done. I really like Harris character. Even though he was a little shady when he was younger, he changed for the better. He is known as a local hero. When we say that sometimes people can change for the better it is exactly what happened with Harris. I was charmed by his no-nonsense attitude and his generosity. When we are struggling we can choose to use them to be more powerful or become a victim. He chose the first one and he is on a mission to prove that he definitely has become a man that he can be proud of. This is a great book with interesting characters and a great plot. I can bet that you won’t be disappointed if you choose to read it.